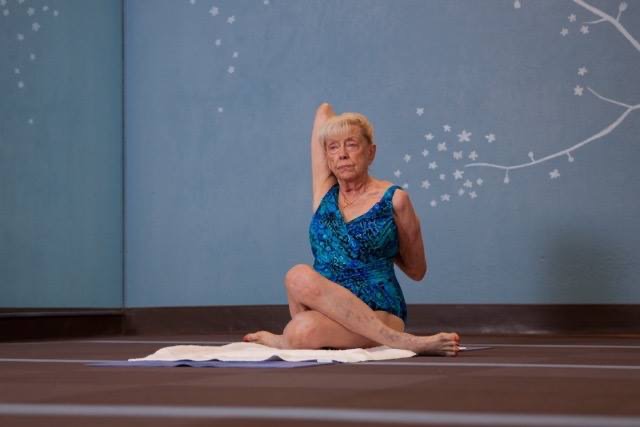 “Change the agony of stretching to the ecstasy of release.”

Emmy Cleaves is an amazing woman.  She is the Principal of the Bikram Yoga College of India, she used to lead the Advanced Class at headquarters three times a week in her mid 80s, and her lecture on pain is one of the most memorable at teacher training.  She’s been practicing Bikram Yoga since the 1970s, and resonates with the philosophy of yoga, as she believes that “we’re not just a quantum mechanic body, that we’re multidimensional beings, and that the body is just a dense form of many interactive energy fields.”

“The first time you do the twenty-six postures which cover a normal range of motion for just about anybody, they act as a diagnostic tool,” she explains. Even people with minimal body awareness are able to diagnose their own problem areas. Then with practice those same postures become therapeutic tools that re-educate your body and heightens the efficiency of its major systems.

Like any well chosen asana program, Bikram Yoga is intended to tone the endocrine, lymphatic, and digestive systems, increase capillary blood flow and produce a strong, limber and comfortable musculoskeletal system. To attain the benefits of this series, though, the sequence of the postures is paramount.

Emmy talks about the gift of pain – without it we would destroy ourselves.  Think about it.  Pain is the message that something in the body is off (could be as extreme as your hand on a hot stove or as small as a splinter stuck in your finger).  If we ignored it, it could possibly turn into a much bigger problem (think about what would happen if you never took your hand off that hot stove)!

There is another level to pain, which is the pain that we reference in class.  Ever hear the instructor to tell you that your back is supposed to hurt?  Or how about telling you to make sure your back hurts?  When we start improving and changing the body, there is a lot of sensation that goes on with that.  When the mind first experiences this, it often freaks out and reacts as if the body was on a hot stove as opposed to just getting a good stretch.  This is normal!  Think about the reaction your body probably had the first time you tried Camel pose.  Pretty dramatic, right?  The trick is to go slow and breathe, and gradually teach our body that it is not experiencing the agony of stretching, but the luxury of release!

This is especially important when dealing with an injury.  It’s important to bring the body into the room to facilitate healing.  Heat + breath = increased circulation = faster healing time.  If you want to alleviate the pain from your bulging disc, come into the room.  If you want to get rid of the frozen shoulder, bring it in.  If you want to get your body in a better place for your next road race, do some yoga.  As you move through the series, the trick is to start to recognise what kind of pain you are dealing with.  The kind of pain that is telling you to stop?  Or the kind of pain that is experiencing something it hasn’t before?  You will learn this over time with a consistent practice.  Go slowly.  Be mindful.  Practice yoga.  As Emmy says, “yoga without mindfulness is just calisthenics.”

“What gives me such pleasure is that I am able to share this valuable thing, which has so much potential to better people’s lives and to heal whatever is not working for them,” Emmy says. “That is the ultimate accomplishment of my life and will be to the end of it.”